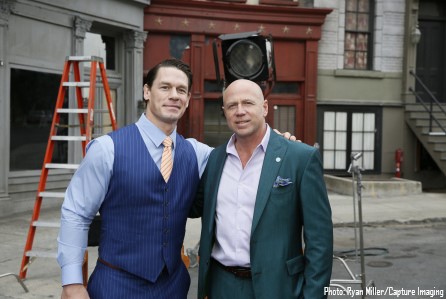 EXCLUSIVE: John Cena, the actor and pro wrestling champion, will be appearing on theater screens all across the country this summer in a 30-second PSA urging movie-goers to support the work of Brave Beginnings, an initiative of the Will Rogers Motion Picture Pioneers Foundation that’s helped save the lives of thousands of premature babies.

Cena, who’s starred in Bumblebee and Trainwreck, is the latest in a cavalcade of stars – dating back to Humphrey Bogart, Bette Davis and James Cagney – who have pitched in to carry on Will Rogers’ work to help sick children. Rogers, the humorist and philanthropist, died in a plane crash in 1935.

“We are thrilled to have John’s support to further our mission so that every neonatal intensive care unit has the proper life-saving equipment imperative to ensuring that premature newborns survive and go on to live healthy lives,” said Kyle Davies, president of domestic distribution at Paramount Pictures and board president of the Will Rogers Motion Picture Pioneers Foundation. “His advocacy for children’s health and positive ‘never give up’ attitude inspires moviegoers and people everywhere.”

Cena, who has granted more than 500 Make-A-Wish requests to sick kids, “has an incredible reputation for helping children and their families,” Davies said.

“The exhibitors help the charity raise money – from cash-in-the-can donations in theaters to concession promotions where a portion of the proceeds go to Brave Beginnings,” Davies said. “The exhibitors come up with different programs to engage with the public to raise money for the charity. We work directly with the theaters to come up with these fund raising programs.”

“The exhibition and distribution community has a need to give back, and they’ve been doing this since 1936. They want to do some good. Brave Beginnings is their latest effort,” said Todd Vradenburg, executive director of Brave Beginnings and the Will Rogers Motion Picture Pioneer Foundation.

Since 2006, the charity has contributed $7.7 million in grants for life-saving ventilator equipment to neonatal intensive care units at 160 U.S. hospitals. This, the charitable organization says, “has impacted the lives of 176,000 babies.”

“We’re the only charitable organization that’s helping doctors and nurses save the lives of premature infants,” Vradenburg told Deadline. “Rural hospitals across the country always need more equipment, and they need better equipment. We set a goal of giving out a million dollars in grants this year, but we could use $5 million. In the past, we have received grant requests of $5-6 million. If we raise a million, we can put that to good use.”

The charity had its beginnings in the days of vaudeville, when tuberculosis was rampant among vaudevillians, who were often forced to live in cramped quarters as they traveled around the country. To combat the deadly disease, the National Vaudeville Association started its own TB sanatorium in upstate New York – called the NVA Lodge. After Rogers’ tragic death, the name of the hospital was changed in 1936 to the Will Rogers Memorial Hospital. The Will Rogers Institute was launched in 1952 to be a research and training center, and the Will Rogers Institute Neonatal Ventalator Program was created in 2006, changing its name to Brave Beginnings in 2015.