As you know, Brave Beginnings works diligently to provide life-saving equipment to hospitals and NICUs that need it the most. We at Brave Beginnings are delighted to announce our first major project grant, awarded to the East Tennessee Children’s Hospital, a total of $750,000. We’re thrilled to tell you about this amazing hospital and our collaboration with them.

East Tennessee Children’s Hospital was founded in 1937 to treat children suffering with polio. Today, the hospital is an independent, not-for-profit hospital that treats children regardless of race, religion or their parent’s ability to pay for treatment. More than 64% of its patients are not covered by insurance; payment to cover the care these children receive comes from the state’s TennCare system. The Emergency Department at Children’s Hospital is the busiest in the state with approximately 70,000 visits per year. In addition, there are 5,900 admissions on average per year. On average, the hospital sees over 10,000 surgical procedures performed per year. These numbers are as staggering as they are because East Tennessee Children’s Hospital is the region’s only Comprehensive Pediatric Referral Center and serves children from some of the most economically challenged areas in Southern Appalachia.

Last year, 790 infants were admitted to the NICU. Of those babies, 313 were diagnosed with Neonatal Abstinence Syndrome (which means these children were born drug dependent) and 477 were born prematurely or transferred due to health issues detected at birth. According to the hospital, improvements to the neonatal intensive care unit (NICU) were long overdue. The hospital needed a way to relocate the NICU to a new facility that would give their PICU a much-needed space in which to grow, as well as to consolidate program elements. Ideally, they envisioned a perioperative platform that would include inpatient and outpatient surgical suites of 8 ORs and 4 procedure rooms supported by a new central sterile processing. Due to the staggering numbers of patients treated at the hospital, and the demand for state-of-the-art, life-saving treatment, as well as the amazing work East Tennessee Children’s does for its tiniest patients, Brave Beginnings was happy to step in and answer the call for help.

Brave Beginnings partnered with the Regal Foundation to make a partnership gift which resulted in the Brave Beginnings NICU Neighborhoods plan, which provided a $750,000 grant to East Tennessee Children’s Hospital from Brave Beginnings, and a $1M grant from the Regal Foundation. We are pleased to announce that the grant funds provided will result in a brand-new, Neonatal Intensive Care Unit. The new unit will include 44 private patient rooms, 5 state-of-the-art care stations, family lobby, sibling playroom, an outside garden terrace, family lounge, 6 interior garden areas, 2 private consultation rooms and a family resource room. These facilities will enable the hospital to continue its commitment to high-quality care, and will deepen and strengthen the hospital’s ability to take on the large amounts of patients it sees year after year and provide them with the best possible, life-saving care. The new NICU is due to open this Fall, and we at Brave Beginnings can’t wait to hear from our friends at East Tennessee Children’s Hospital about the lives that will be saved, the families strengthened, and all of the exciting benefits that are to come! 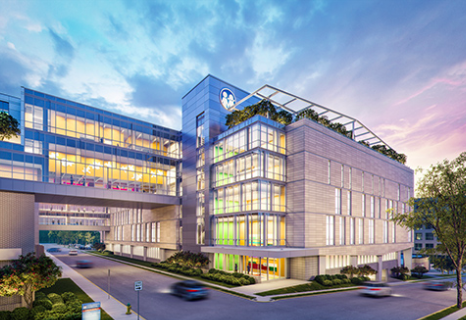 A projection of what the new NICU at East Tennessee Children’s Hospital will look like when completed. For more information on the amazing work this hospital does, and their unique efforts to help treat NAS (Neonatal Abstinence Syndrome), head to their website: https://www.etch.com/about/specialties/neonatal-intensive-care/