As you know, Brave Beginnings provides funds to hospitals to purchase state-of-the-art, life-saving equipment for their NICUs, which allows preemies to get the care they need to survive and thrive. Recently, we had the pleasure of awarding a $50,000 grant to the Hardin Memorial Health Foundation in Kentucky, which is currently working to build the region’s only fully operational Level II NICU. The funds we provided will be used towards purchasing a central cardiorespiratory monitoring system, which allows the NICU staff to observe babies all at once and a vein viewer to see the preemies’ tiny veins more clearly.

According to Todd Vradenburg, executive director of the Will Rogers Motion Picture Pioneers Foundation, Hardin Memorial Health was an excellent fit for one of our grants, as their NICU continues to grow and serve one-tenth of Kentucky’s entire population. “Brave Beginnings believes that every child deserves a fighting chance, and we know that babies in Central Kentucky are thriving close to home thanks to the HMH NICU,” Vradenburg said. “We are proud to help equip them with critical technology like the vein viewer that lessens trauma and keeps babies more comfortable.”

To celebrate the reward to the team at Hardin Memorial Health, we’d like to share some of the stories of preemies whose lives will benefit from the life-saving technology the hospital is now able to purchase. 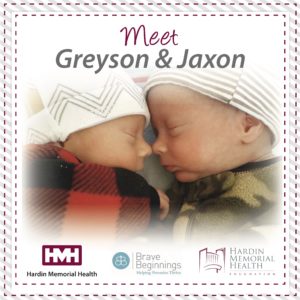 According to our friends at HMH:

Twins Greyson and Jaxon were born after an emergency Caesarian section at 31-weeks gestation. Their parents called the situation terrifying but say they received the very best care. Having a Level II NICU close to home allowed them to spend more time with Greyson and Jaxon, making the experience less stressful. After a month-long stay, the boys both gained two pounds and were thriving and ready to head home. 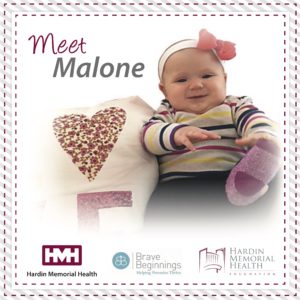 According to the HMH Foundation:

Malone was born at 35-weeks gestation weighing 5 pounds, 15 ounces. Because her breathing was irregular, Malone was cared for in HMH’s Level II NICU, where, thanks to state of the art equipment and highly trained staff, her oxygen levels could be closely monitored and she could be treated. Malone, like many premature babies, needed specialized care to ensure her lungs were well developed and to treat her jaundice.
Malone’s mom, Brooke Wallace, was grateful that the necessary level of care was available close to home so that she didn’t have to be separated from her infant child and could more easily care for Malone’s four older siblings. 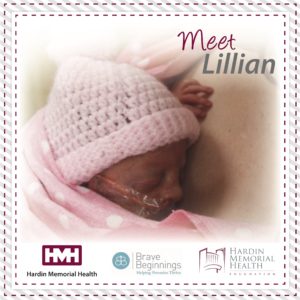 According to the HMH Foundation:

Born at just 29 weeks, Lillian Jane, is the youngest patient cared for in HMH’s Level II Neonatal Intensive Care Unit (NICU). At birth, she weighed just 2 pounds, 7 ounces and was a mere 14 inches long. Despite being very small, Lilly was a fighter.
While in the NICU, HMH’s highly trained staff provided essential care – helping Lilly grow stronger and gain weight. Lilly’s mom, Melissa Peters, was grateful that this level of care was available in Central Kentucky. “I was able to be with her every day,” said Melissa.
Today, Lilly is home and healthy.

As our executive director, Todd Vradenburg said, the HMH Foundation was a perfect fit for a grant because of its NICU’s rapid growth and service to such a signification proportion of Kentucky’s population. It is so important for this NICU to be able to continue caring for its littlest patients, and having access to state-of-the-art technology often means the difference between life and death for NICU patients. Brave Beginnings is so proud to have awarded this fantastic organization with the funds to give its patients a fighting chance to thrive!